Home » News » How Does A NASCAR Pit Crew Work? 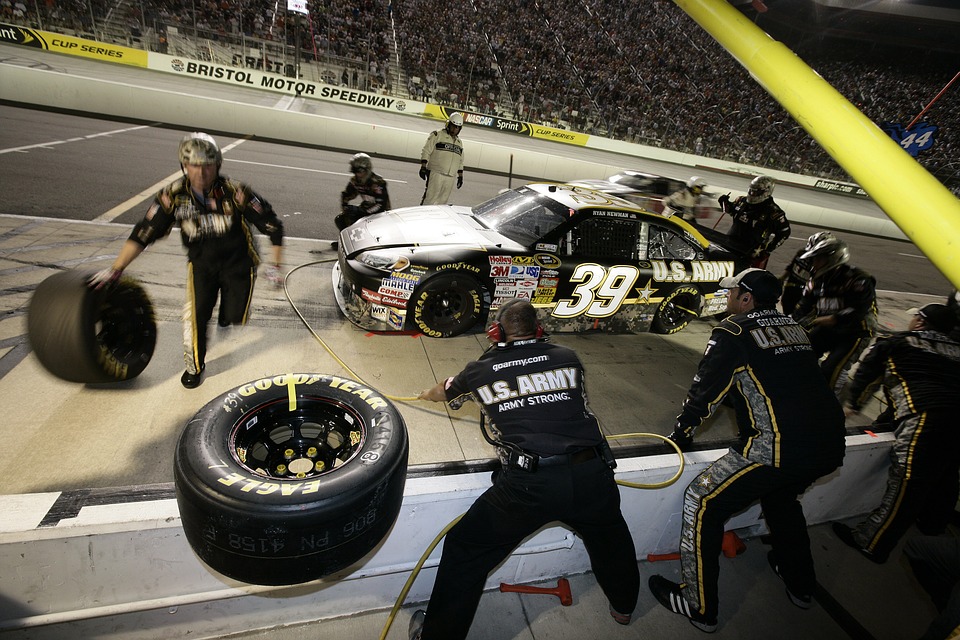 How Does A NASCAR Pit Crew Work?

Millions of people tune into racing sports daily, excited to see whether their sports betting has proven successful and watch their favourite racers take that all-important 1st place step on the podium. However, without an effective NASCAR pit crew, we wouldn’t be able to enjoy Formula 1 like we do today. Think about it – no cars would ever carry enough fuel to get them through the race, and some of the most legendary drivers won’t be able to carry on with their tyres squished flat! Therefore, it’s important to pay tribute to the NASCAR pit crew, and appreciate the hard work that they do through every race.

What Is A NASCAR Pit Crew?

A NASCAR pit crew is a group of highly-skilled car mechanics, who will all have individual allocated jobs to improve the quality of the car being raced. These talented individuals reside within a pit stop on the racing track, and allow vehicles to pull in fast whilst they speedily adjust and alter the parts of the car that aren’t performing well or simply need enhancing. For the average person, the term ‘pit stop’ has come to mean stopping off at the petrol station and taking your time looking for snacks to bring back to your car. For mechanics in a NASCAR pit crew though, the notion is much more serious, and more a case of how quickly they can safely attend to a car before it can get back on the tracks again (some working as quickly as 12 seconds!).

Without the NASCAR pit crew, a race just wouldn’t be able to function effectively. Within a pit crew, there are numerous jobs taken on by different people, with the Crew Chief allocating the particular jobs to each person. Let’s take a look at these job functions more closely.

Who Operates In A NASCAR Pit Crew?

The first thing to remember about the NASCAR pit crew is that they’re all dedicated to optimising the same car, attempting to fix it as fast as they possibly can, and this is only possibly with the correct pit crew choreography. Whilst the Crew Chief is ultimately in charge of every single job role, it’s the Car Chief that prepares the race car before the race even commences, and this is a very important job due to the strict regulations put in place by NASCAR standards and the Crew Chief’s directions. Without complete compliance, the racer could be disqualified from the race, and the Car Chief could be dismissed from his position.

Next, a step down from the chiefs, comes the Jackman, who – you guessed it – is responsible for lowering and raising the vehicle to ensure that tyres can be fitted quickly and effectively. Meanwhile, the Gas Man refuels the vehicle, whilst the Tyre Changers do exactly what it says on the tin – change the front and rear tyres! To assist the Tyre Changers, there will be Tyre Carriers, who fetch and position the new tyres ready for the Changers to complete the job.

It doesn’t end there though, as a Seventh Man is at hand to ensure that the windshield is thoroughly cleaned to streamline the performance of the driver, as well as tend to the driver and ensure that they’re happy with the overall performance of the race car. The NASCAR pit crew team might seem extravagant, but every member of the team is essential to ensuring the driver can race safely and efficiently – and in quick time.

A couple of weeks ago, it was suddenly announced that 2018 would see some slight changes to the ways that a NASCAR pit crew operates. The number of members in a NASCAR pit crew can vary depending on the racing event, and the number of members has been reduced from six to five in NASCAR’s three national series. The reason behind this alteration is due to the desire to improve parity in the racing sport. In addition to this, there will also be a limitation on the workers in two other categories, which have been defined as “organisational” and “road crew”.

NASCAR are aware of how capable and talented these mechanics are, and so these alterations will really test their ability and present some different challenges that they haven’t faced before, inspiring innovation within the pit crew.

The NASCAR pit crew is essentially the giant toolbox behind every car racing event, with their absence inevitably ending in the failure of the event. Whilst changes to their standards have caught people by surprise, there certainly won’t be mayhem stirring in the pit crew any time soon. After all, they are all far too talented for that.