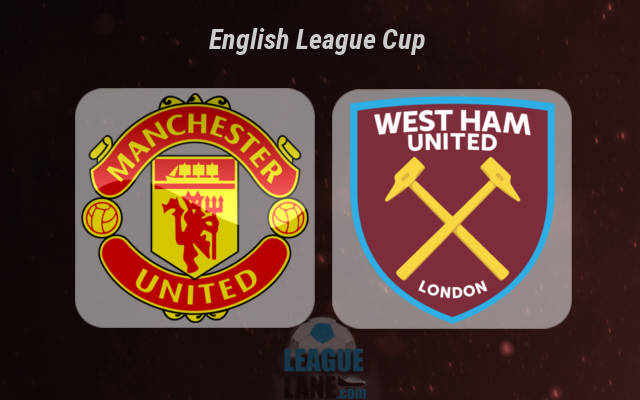 We can only hope that West Ham’s PA got them a good deal on staying in a Manchester hotel for the past three nights as it’s hardly been worth travelling back down to London following Sunday’s clash at Old Trafford. Well tonight the two teams meet again, this time in the English Football League Cup (formerly known as the Capital One Cup). A place in the semi-finals is at stake for the winner of this tie, here we break down the football betting odds for both teams in this exclusive preview.

So far, life in Manchester hasn’t been the fairytale that José Mourinho may have had in mind. After 13 league games he is statistically worse off than David Moyes was during his only season in charge of the Red Devils, even if Mourinho is currently two places higher. Mourinho has been claiming that Manchester United are the unluckiest team in the league, and he may have a point. This United side are playing a far more attacking style in comparison to the Van Gaal and Moyes teams that were seemingly set up to avoid defeat. In their last four home games, United have had 33 shots on target but only three goals to show for it, thanks to opposing goalkeepers in the form of their lives.

José Mourinho is unbeaten in the League Cup since December 2013, he won the competition with Chelsea in 2015, and was sacked before he got the chance to retain it. His form in the league may be patchy, but his side have performed well in the EFL Cup with wins so far over Northampton town and Manchester City. Paul Pogba and Marouane Fellaini will both miss the game through suspension, while Michael Carrick is likely to return to starting line-up after sitting out of Sunday’s game, and Wayne Rooney is still chasing Bobby Charlton’s record as all time top goalscorer.  Ladbrokes make Manchester United the favourites to advance to the semis with odds of 2/5.

Slaven Bilić formerly played for West Ham before returning as a manager in June 2015. In his first season he masterminded the teams final season at the Boleyn Ground (better known as Upton Park) finishing 7th, their best Premier League finish in recent memory. They’ve struggled to live up to the expectation at their new home this year, having only won twice from their six home league games. However, they have been more impressive in the EFL cup, which included a fourth round victory over Chelsea which has earned them a second date at Old Trafford in the space of three days.

Diafra Sakho scored at Old Trafford on Sunday, but he will miss this Cup game through injury. Meanwhile Andy Carroll is still recovering from a knee problem, but Winston Reid is available again after serving his suspension. None of the pundits expect West Ham to win here, but Slaven Bilić, who has been rumoured for the chop, is currently listed by Betfair at 7/2 to be the next manager to lose his job.