Lotteries are amongst oldest recorded forms of gambling and typically involve the drawing of lots for a prize. The earliest know form of lottery is during the Chinese Han Dynasty between 205 and 187 BC in the form of keno slips. It is believed that the revenue generated from these kinds of lotteries funded the Great Wall of China and other similar projects. European lotteries are believed to date back to the time of the Roman Empire as entertainment during dinner parties. Guests would each receive a ticket and lots would then be drawn with dinnerware and other fancy items would be among the range of prizes. However, no profits were made as the tickets were given out for free to all dinner guests, with everybody assured the chance of winning something from the wealthy nobleman who hosted the party. A lottery organised by Roman Emperor Augustus Caesar is the first recorded example of lottery tickets for sale with the funds being used for repairs in the City of Rome and the ranges of prizes for the players were unequal in value. 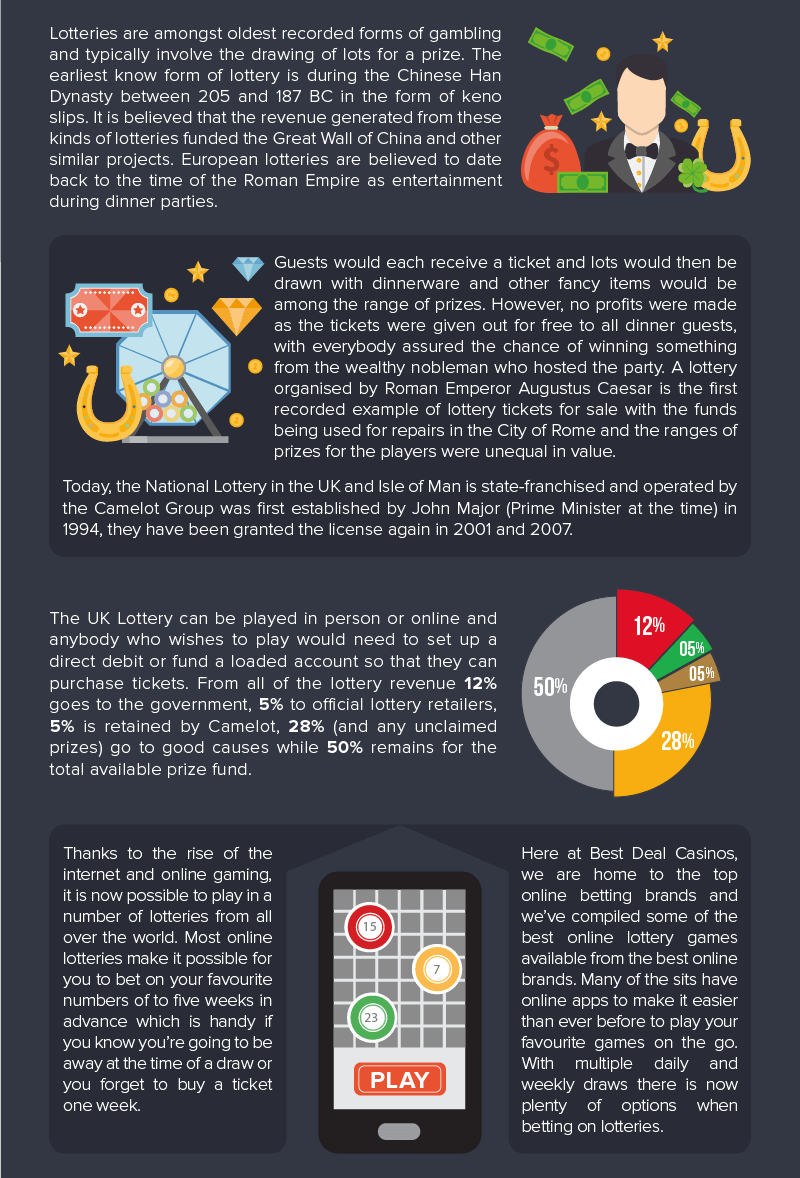 Today, the National Lottery in the UK and Isle of Man is state-franchised and operated by the Camelot Group was first established by John Major (Prime Minister at the time) in 1994, they have been granted the license again in 2001 and 2007. The UK Lottery can be played in person or online and anybody who wishes to play would need to set up a direct debit or fund a loaded account so that they can purchase tickets. From all of the lottery revenue 12% goes to the government, 5% to official lottery retailers, 5% is retained by Camelot, 28% (and any unclaimed prizes) go to good causes while 50% remains for the total available prize fund.
Thanks to the rise of the internet and online gaming, it is now possible to play in a number of lotteries from all over the world. Most online lotteries make it possible for you to bet on your favourite numbers of to five weeks in advance which is handy if you know you’re going to be away at the time of a draw or you forget to buy a ticket one week.
Here at Best Deal Casinos, we are home to the top online betting brands and we’ve compiled some of the best online lottery games available from the best online brands. Many of the sits have online apps to make it easier than ever before to play your favourite games on the go. With multiple daily and weekly draws there is now plenty of options when betting on lotteries. 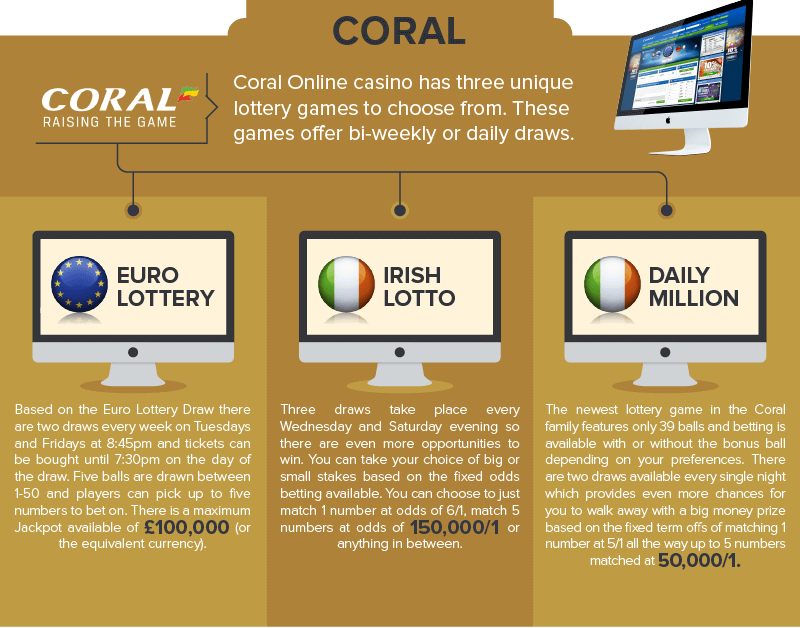 Coral Online casino has three unique lottery games to choose from. These games offer bi-weekly or daily draws.
Euro Lottery
Based on the Euro Lottery Draw there are two draws every week on Tuesdays and Fridays at 8:45pm and tickets can be bought until 7:30pm on the day of the draw. Five balls are drawn between 1-50 and players can pick up to five numbers to bet on. There is a maximum Jackpot available of £100,000 (or the equivalent currency).
Irish Lotto
Three draws take place every Wednesday and Saturday evening so there are even more opportunities to win. You can take your choice of big or small stakes based on the fixed odds betting available. You can choose to just match 1 number at odds of 6/1, match 5 numbers at odds of 150,000/1 or anything in between.
Daily Million
The newest lottery game in the Coral family features only 39 balls and betting is available with or without the bonus ball depending on your preferences. There are two draws available every single night which provides even more chances for you to walk away with a big money prize based on the fixed term offs of matching 1 number at 5/1 all the way up to 5 numbers matched at 50,000/1. 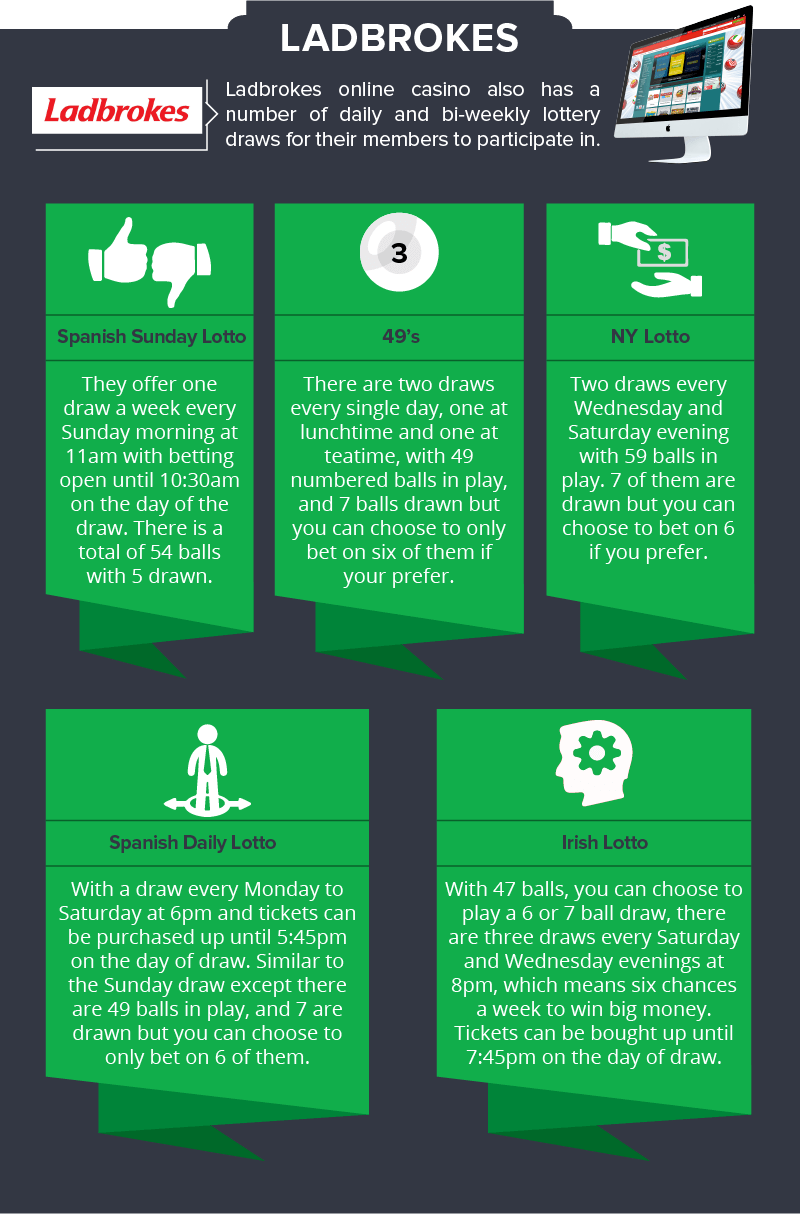 Ladbrokes online casino also has a number of daily and bi-weekly lottery draws for their members to participate in.
Spanish Sunday Lotto
They offer one draw a week every Sunday morning at 11am with betting open until 10:30am on the day of the draw. There is a total of 54 balls with 5 drawn.

Spanish Daily Lotto
With a draw every Monday to Saturday at 6pm and tickets can be purchased up until 5:45pm on the day of draw. Similar to the Sunday draw except there are 49 balls in play, and 7 are drawn but you can choose to only bet on 6 of them.

Irish Lotto
With 47 balls, you can choose to play a 6 or 7 ball draw, there are three draws every Saturday and Wednesday evenings at 8pm, which means six chances a week to win big money. Tickets can be bought up until 7:45pm on the day of draw.

49’s
There are two draws every single day, one at lunchtime and one at teatime, with 49 numbered balls in play, and 7 balls drawn but you can choose to only bet on six of them if your prefer.

NY Lotto
Two draws every Wednesday and Saturday evening with 59 balls in play. 7 of them are drawn but you can choose to bet on 6 if you prefer.

All based on official draws from a number of European countries and offer bi-weekly or daily draws.

Afternoon Daily Millions
Based on the official Irish Daily Million Lottery Draw, there are two draws every day (a Main and a Plus) at 2pm. 6 balls (plus the bonus) are drawn from 39 possible numbers you can select up to five of them every day until 1:45pm.

Evening Daily Millions
Also based on the official Irish Daily Million Lottery Draw, 6 balls plus the bonus ball are drawn from a total of 39, each uniquely numbered 1 through 39.

German Lottery
Based on the Official German Lotto and managed by the government of the Federal Republic of Germany. With draws every Wednesday and Saturday evenings, 6 balls are draw from a total of 49 numbers. Betting is available on 1,2,3 or 4 numbers, and betting is not offered on the Bonus ball. 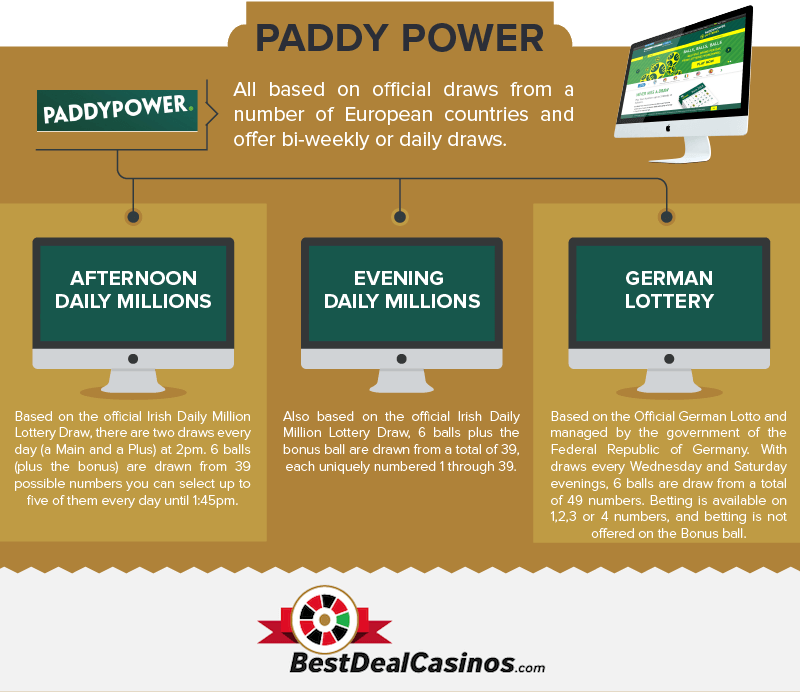