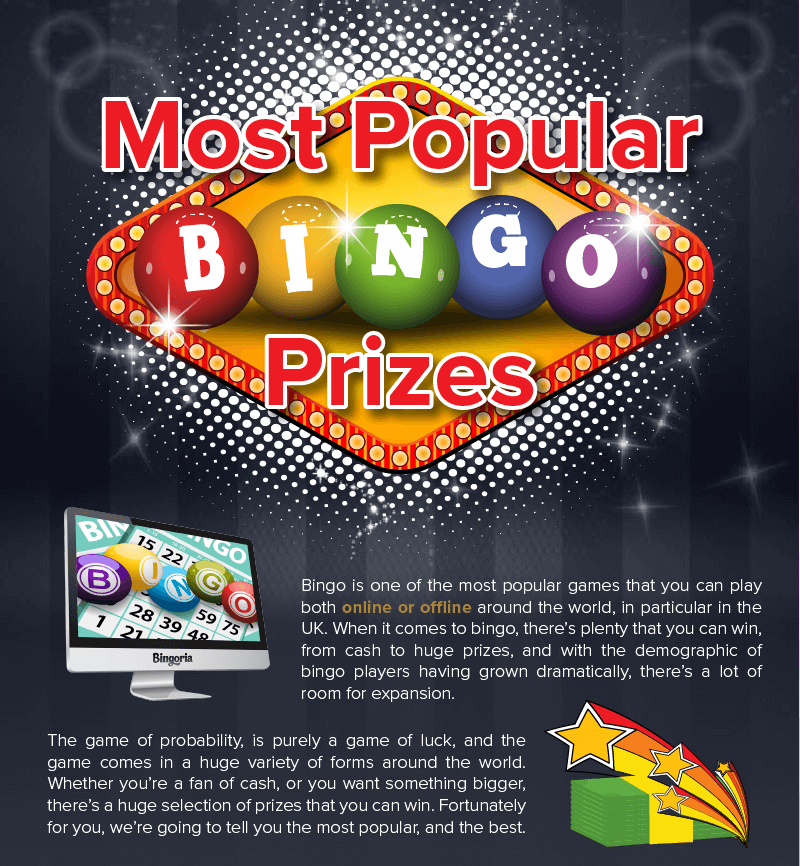 Bingo is one of the most popular games that you can play both online or offline around the world, in particular in the UK. When it comes to bingo, there’s plenty that you can win, from cash to huge prizes, and with the demographic of bingo players having grown dramatically, there’s a lot of room for expansion. The game of probability, is purely a game of luck, and the game comes in a huge variety of forms around the world. Whether you’re a fan of cash, or you want something bigger, there’s a huge selection of prizes that you can win. Fortunately for you, we’re going to tell you the most popular, and the best. 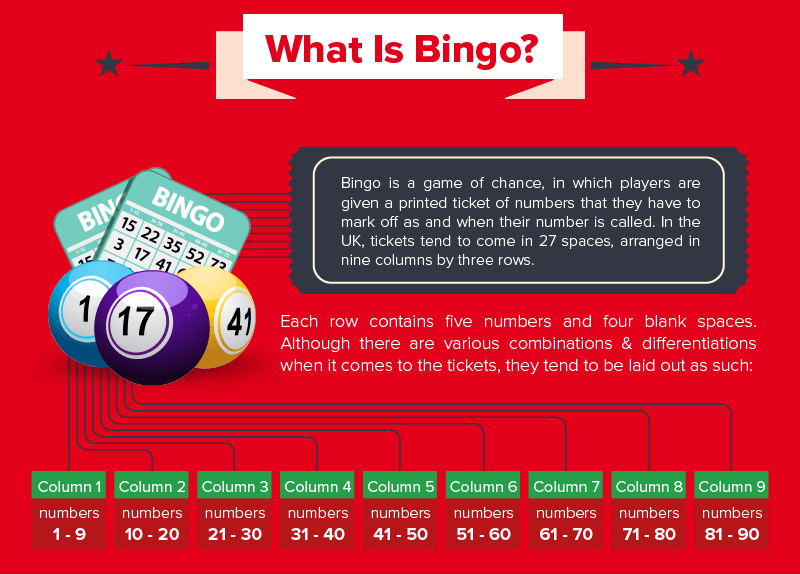 Bingo is a game of chance, in which players are given a printed ticket of numbers that they have to mark off as and when their number is called. In the UK, tickets tend to come in 27 spaces, arranged in nine columns by three rows. Each row contains five numbers and four blank spaces. Although there are various combinations and differentiations when it comes to the tickets, they tend to be laid out as such:

How The Game Works

The game is presided over by a caller whose job it is to call out the numbers, and then validate the winning tickets. The prize or prizes for each game will be announced before that game begins. The numbers are randomly selected, by either an electronic random number generator, by drawing counters from a bag or by using balls from a mechanical draw machine. There are a number of different winning combinations in bingo including the four corners, a line, two lines, and a full house (all numbers on a ticket). 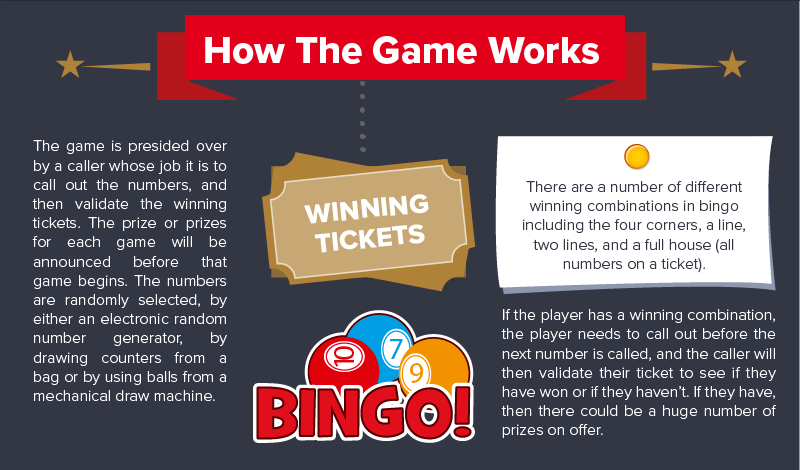 If the player has a winning combination, the player needs to call out before the next number is called, and the caller will then validate their ticket to see if they have won or if they haven’t. If they have, then there could be a huge number of prizes on offer.

Bingo halls grew in popularity until 2005, where factors such as higher taxation and online gambling began to cause land-based halls to shut down. As a general rule, women tend to spend around 47% more time playing online bingo than men and account for more than 4/5 of players. 74% of players also say that they prefer the online equivalent instead of using a land-based bingo hall. 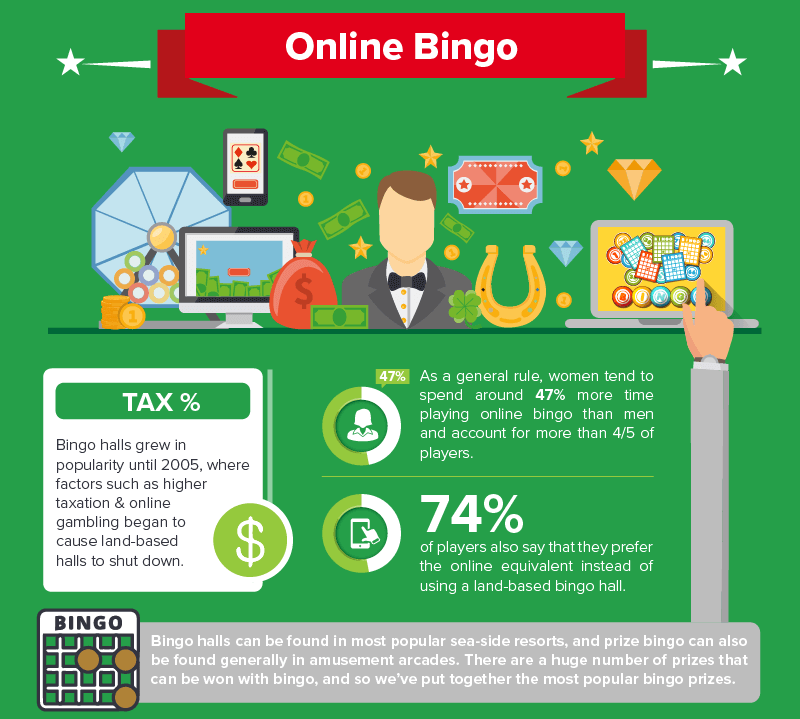 Bingo halls can be found in most popular sea-side resorts, and prize bingo can also be found generally in amusement arcades. There are a huge number of prizes that can be won with bingo, and so we’ve put together the most popular bingo prizes.

Traditionally, a cash prize is the most commonly won prize, and also one of the most popular. In 2012, an online casino player scooped £5.9 million on an online slot based on a bingo game. This is the world’s biggest ever online bingo win, having beaten the old UK record which was £1.2m, and the old world record of £5.1 which was won in Greece. 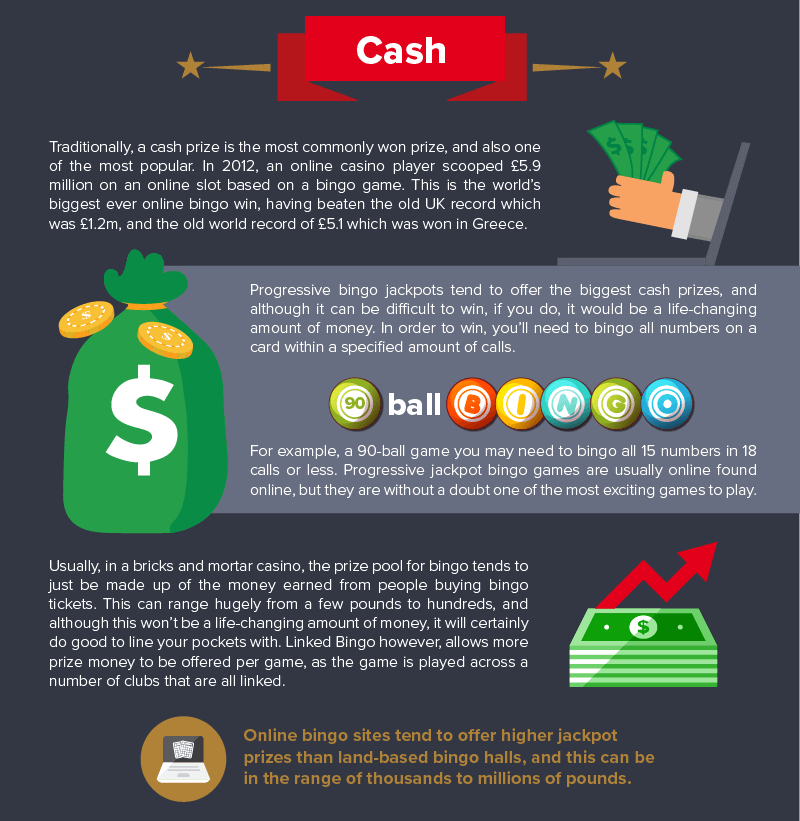 Progressive bingo jackpots tend to offer the biggest cash prizes, and although it can be difficult to win, if you do, it would be a life-changing amount of money. In order to win, you’ll need to bingo all numbers on a card within a specified amount of calls. For example, a 90-ball game you may need to bingo all 15 numbers in 18 calls or less. Progressive jackpot bingo games are usually online found online, but they are without a doubt one of the most exciting games to play.

Usually, in a bricks and mortar casino, the prize pool for bingo tends to just be made up of the money earned from people buying bingo tickets. This can range hugely from a few pounds to hundreds, and although this won’t be a life-changing amount of money, it will certainly do good to line your pockets with. Linked Bingo however, allows more prize money to be offered per game, as the game is played across a number of clubs that are all linked.

Online bingo sites tend to offer higher jackpot prizes than land-based bingo halls, and this can be in the range of thousands to millions of pounds.

Arcade prize bingo is one of the most popular forms, and tends to be found in amusement arcades on beach-side resorts. These are usually played via dedicated consoles connected to a central console where the caller sits. The standard stake is usually 20p which enables two cards to be played. The majority of prize bingo setups tend to automatically release a token into a player’s winning tray when they have made a valid win. The number of tokens depends on how many people were playing and which card had the winning line.

These are commonly found in the seaside resorts such as Blackpool, and is essentially a set of linked slot machines. The tokens that have been won can be redeemed for prizes in the arcade’s prize shop, and although they rarely have monetary value, they can be validated to win various toys, sweets and ornaments in the prize shop. Although these are not necessarily huge prizes, arcade prize bingo is one of the most popular forms that are played.

The National Bingo Game and other online bingo sites tend to give players the chance to win a VIP or Bingo Cruise every year. The 2016 VIP Cruise from National Bingo Game, is an all-expenses paid holiday for two adults if a player is successful to claim either a National Prize and/or Club Prize in 47 calls or less. This cruise can be won by 75 people, and will continue to run until all 75 cruises are won. This is easily one of the most popular bingo prizes available on the market.

A VIP weekend trip is another popular prize that is offered by many bingo sites. These can be focussed on city breaks around the world, but more likely in London or somewhere else in England. The National Bingo Game offers this prize to 75 lucky winners. Weekend trips are always a good incentive for people to play, and often include travel and accommodation costs, if not free food and drink as well. VIP trips are easily one of the most popular casino prizes available. 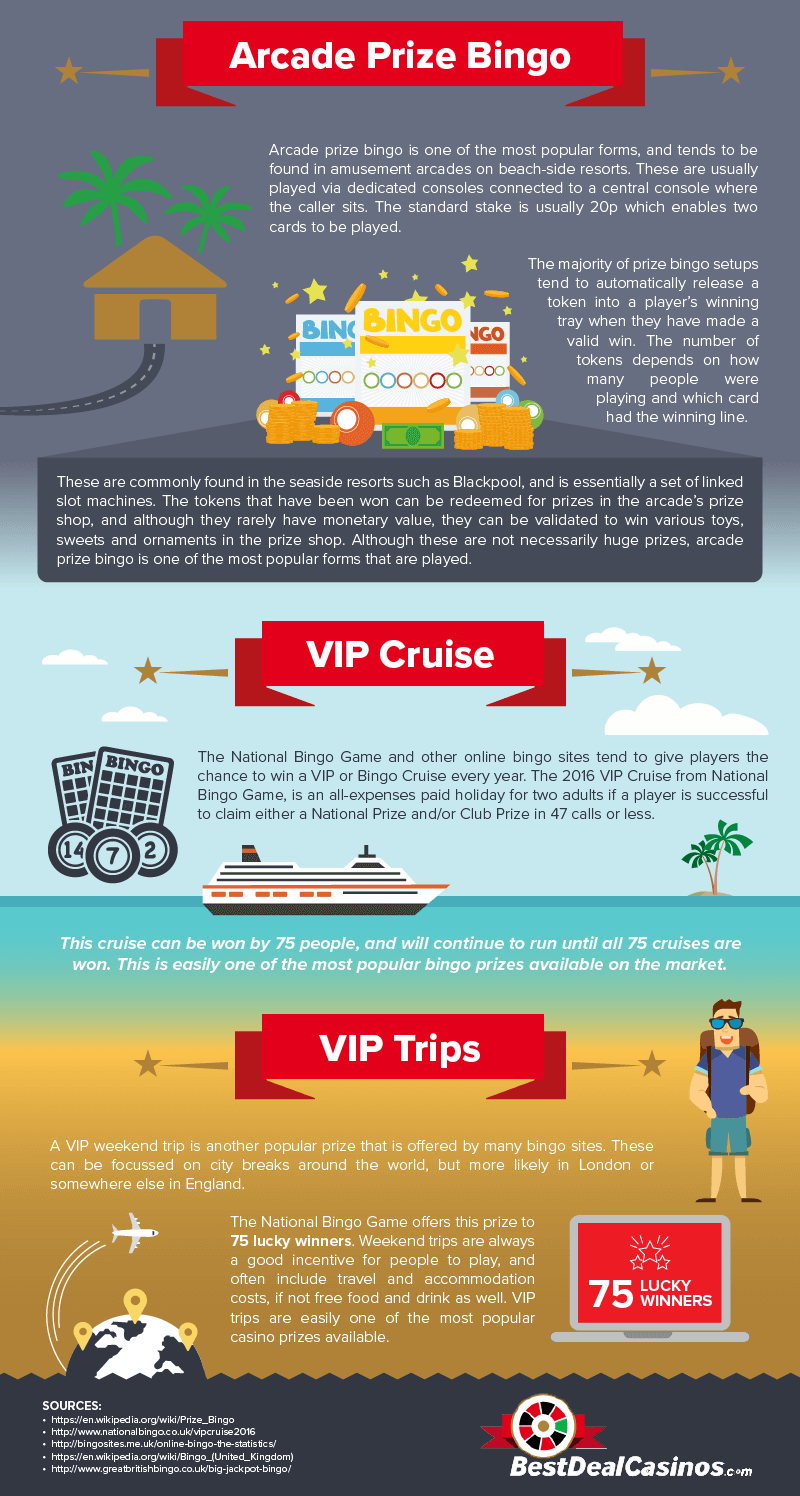