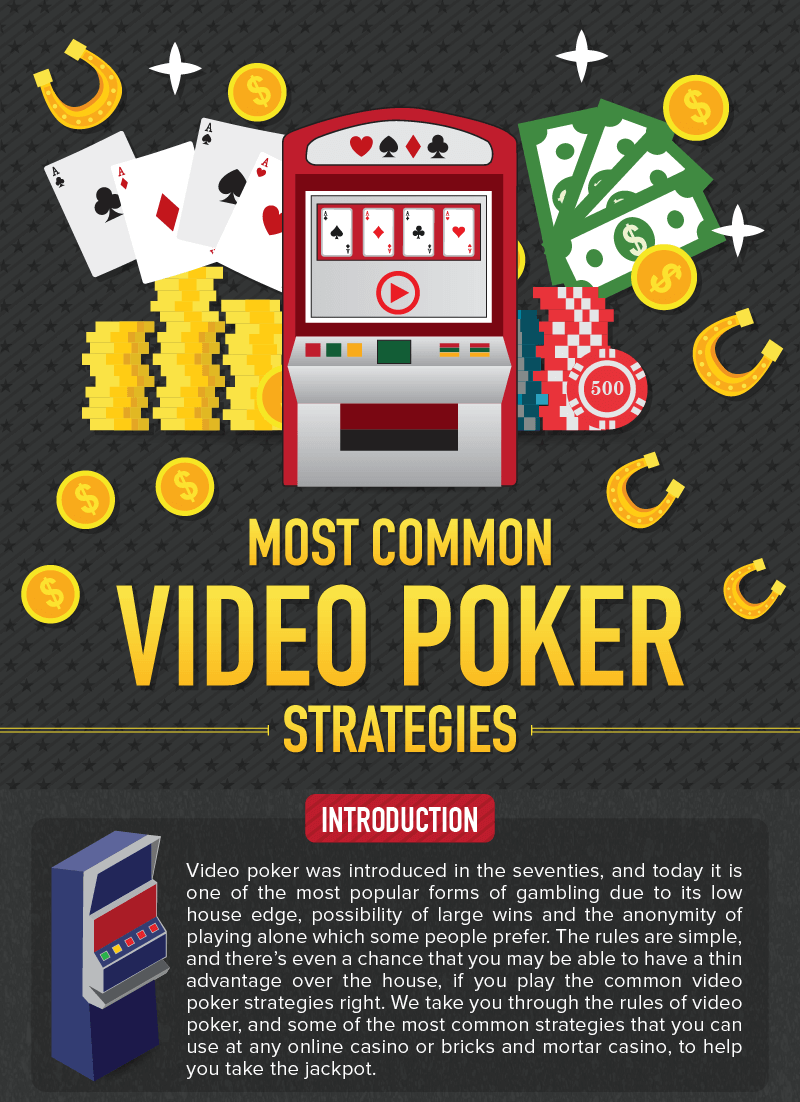 Video poker was introduced in the seventies, and today it is one of the most popular forms of gambling due to its low house edge, possibility of large wins and the anonymity of playing alone which some people prefer. The rules are simple, and there’s even a chance that you may be able to have a thin advantage over the house, if you play the common video poker strategies right. We take you through the rules of video poker, and some of the most common strategies that you can use at any online casino or bricks and mortar casino, to help you take the jackpot.

The rules of video poker are relatively simple, and there’s a number of standard rules that apply on most games that you will find. Firstly, most video poker games are played with a standard 52-card deck. In joker wild games this will include one or more jokers in the deck too, but this is dependent on the variation of the game. After making a wager, and pressing the deal button, the game will randomly give the player five cards from the deck. With video poker, the player then chooses which cards to throw away and which ones to keep.  The game will then replace the discarded cards with randomly chosen cards from the remaining deck.  Once this has happened, the player is paid according to the poker value of his hand and the posted pay table. 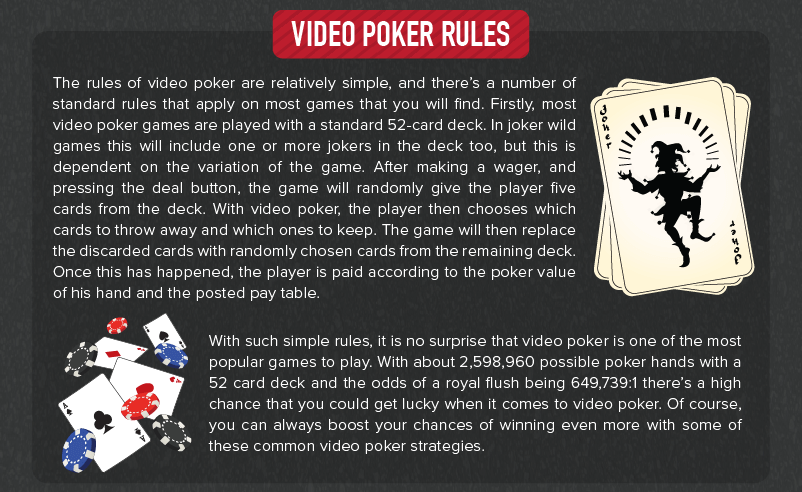 With such simple rules, it is no surprise that video poker is one of the most popular games to play. With about 2,598,960 possible poker hands with a 52 card deck and the odds of a royal flush being 649,739:1 there’s a high chance that you could get lucky when it comes to video poker. Of course, you can always boost your chances of winning even more with some of these common video poker strategies.

Most players like to mix up their play, but some serious online players know that the best odds are likely to be found in video poker. Video poker is structured to play like as stud poker variants, and should be played with a proper strategy to maximise one’s chances of winning. The odds can be different depending on the game, but a Jacks or Better game played with a perfect strategy can give the player a 99.54% return. Even if your strategy isn’t perfect and you only make a few mistakes, your average return is still around 99.52%. The one thing you should look for when you play video poker is a 9/6 pay table – which will pay 9:1 if you get a full house, and a 6:1 when you get a flush.

By employing a basic strategy, players can enforce a rigid playing system that helps them to gain the best chance of winning based on the rules and payouts. This can move the expected payback percentage by a few points, and can even leave the house at a disadvantage.

Deuces Wild card holding strategy consists of some simple rules to follow depending on how many, deuces have been dealt to the player initially. There is a lot to remember when it comes to the Deuces Wild strategy. A player is likely to get dealt a deuce in their starting hand on average ever 2.6 hands. Getting dealt a pair without a deuce will occur 42% of the time, and players have a 15% chance of getting dealt a pair and a deuce. When drawing three cards while holding a pair, you have a 1 in 4 chance of drawing a deuce. 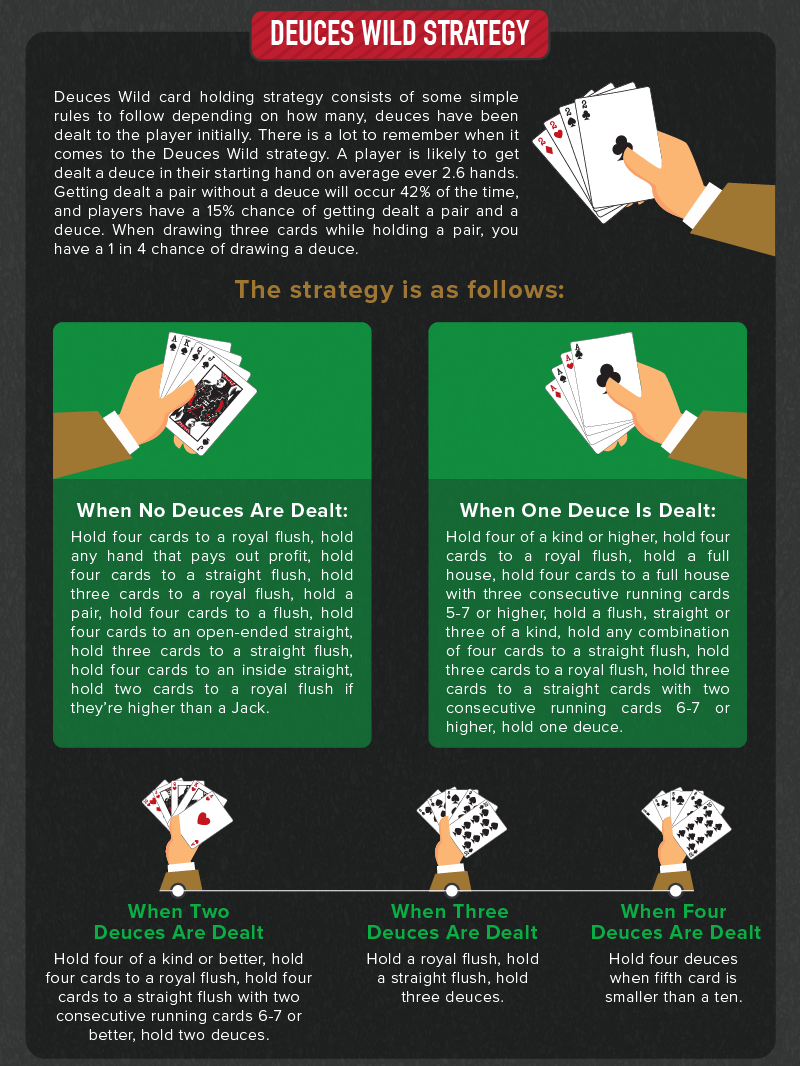 The strategy is as follows:

When Four Deuces Are Dealt: Hold four deuces when fifth card is smaller than a ten.

This strategy is for Jacks or Better, and this should yield a return of around 99.46% if carried out properly. Once the game has dealt five cards, look at your starting hand and determine the various ways it can be played. The strategy goes as follows:

Each version of video poker has a different pay table, so you can choose the one that’s most appealing to you, to help you to decide which strategy will work for you. Some games have better payouts that others, so it’s in your interest to search through the paytables to find the most profitable options. Although the game isn’t overly difficult to learn, there’s a moderate amount of memorisation involved to really help you get the most out of your game. Play your cards right, and you might even be able to reduce the house’s edge. 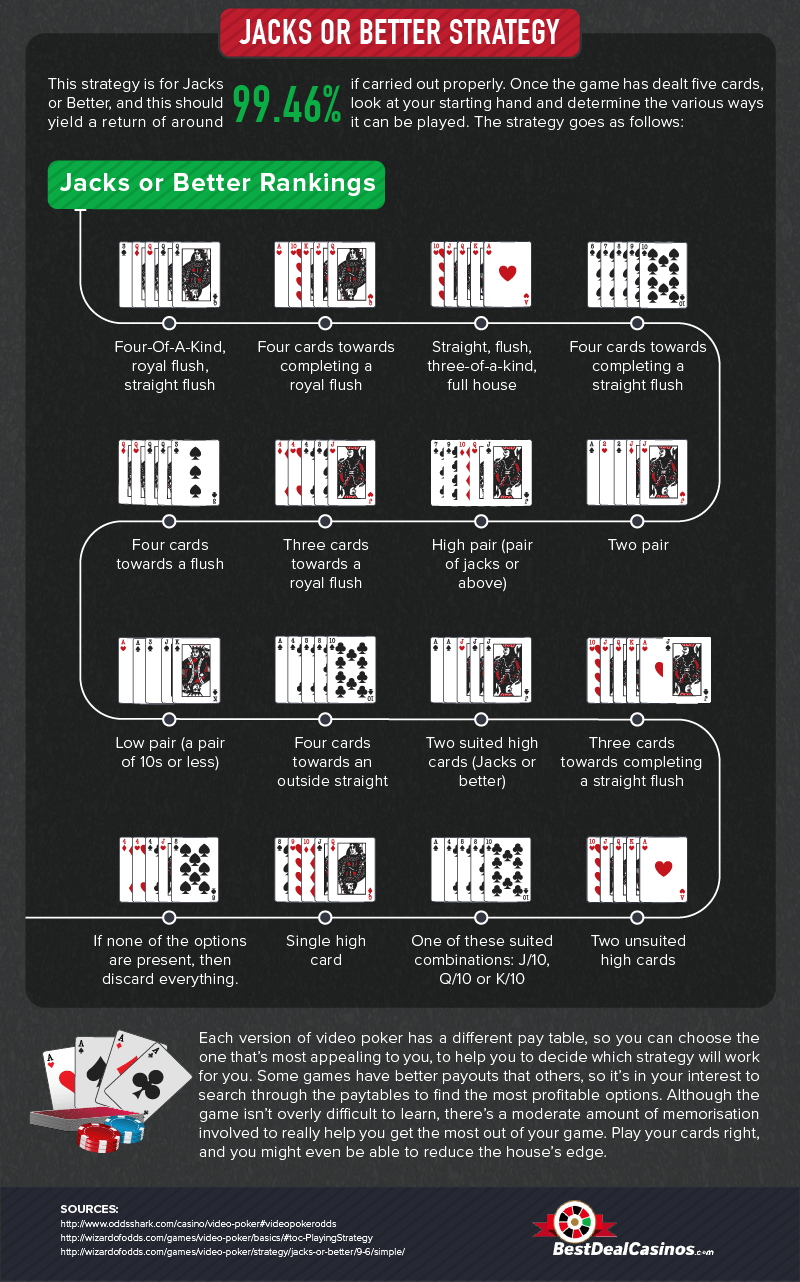