Sic Bo, also known as Tai Sai, Big and Small or Hi-Lo is a fast-paced, no-nonsense game that should appeal to those who are fans of both Craps and Roulette. Sic Bo (pronounced See Bo) means ‘dice pair’; however the game is played with three dice. The game traces back to ancient China and is an unequal game of chance being popular in Asia and widely played in casinos in Macau. It was introduced to the United States by Chinese immigrants in the early 20th century and is commonly played in most American casinos. Since May 2002 it made its way across the pond and became legal in licenced casinos throughout the United Kingdom under The Gaming Clubs. Interestingly enough, a number of English games have been developed and inspired by Sic Bo, games such as Grand Hazard and Chuck-a-Luck, so if you have played either of these, your well on your way in becoming a master of the game  and if you haven’t; don’t fret, this guide is here to help. 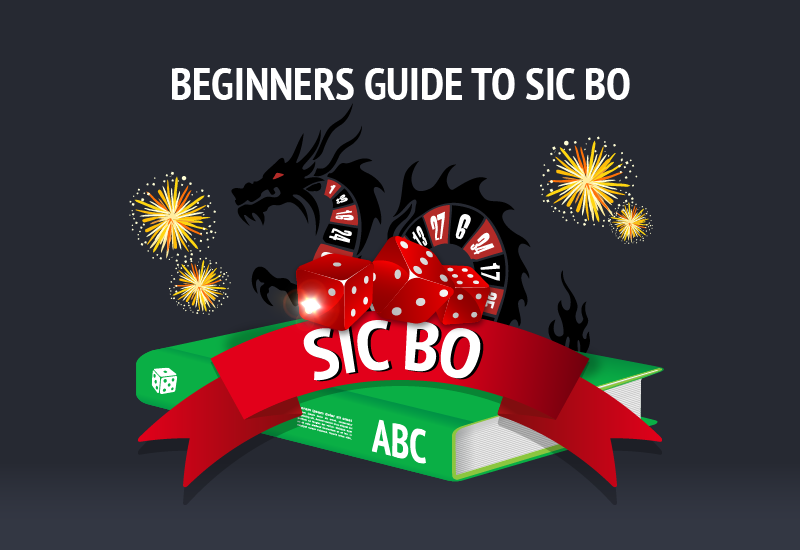 The main advantage of live Sic Bo, compared to other games, is the simplicity of the rules and the gameplay. The game is basically a prediction of outcomes for a roll of three dice. The game uses a table layout similar to Crap, yet most people believe it to be a lot easier to understand. With this said, the game itself maybe rather simple to play but the amounts of bets and bet types however can be very diverse. Players are to put their bets on certain areas of the table. The dealer then picks up a small chest containing the dice which he shakes; the dealer then opens the chest to reveal the combination. Like already mentioned, Sic Bo is strictly a game of chance because every roll on the dice results in a win or loss on any bets. 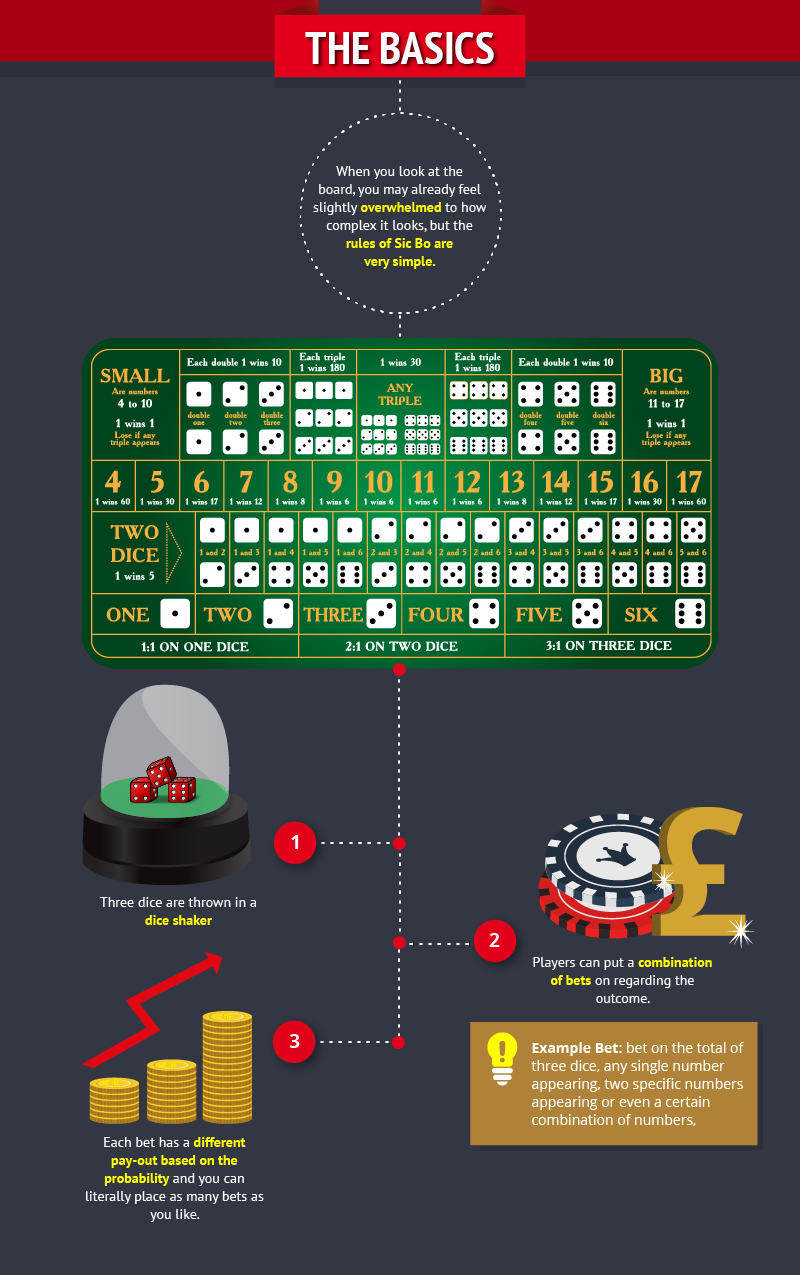 When you look at the board, you may already feel slightly overwhelmed to how complex it looks, but the rules of Sic Bo are very simple. Three dice are thrown in a small cage and customers can put a combination of bets on regarding the outcome. For example you can bet on the total of three dice, any single number appearing, two specific numbers appearing or even a certain combination of numbers, so there’s a lot of choice on offer within this game. Obviously, each bet has a different pay-out based on the probability and you can literally place as many bets as you like.

Sic Bo is the perfect gambling game for players looking for a good time without taxing themselves mentally; at the end of the day it’s a game chance and probability, so you don’t did to train yourself or be skilful in regards to having a high chance of winning. That’s why games like this fare popular with its customers because of most of us just want to have a little fun whilst chasing that big score along the way. Sic Bo doesn’t require applying any well-worked strategies, all it requires from you is having the ability to guess the outcome. 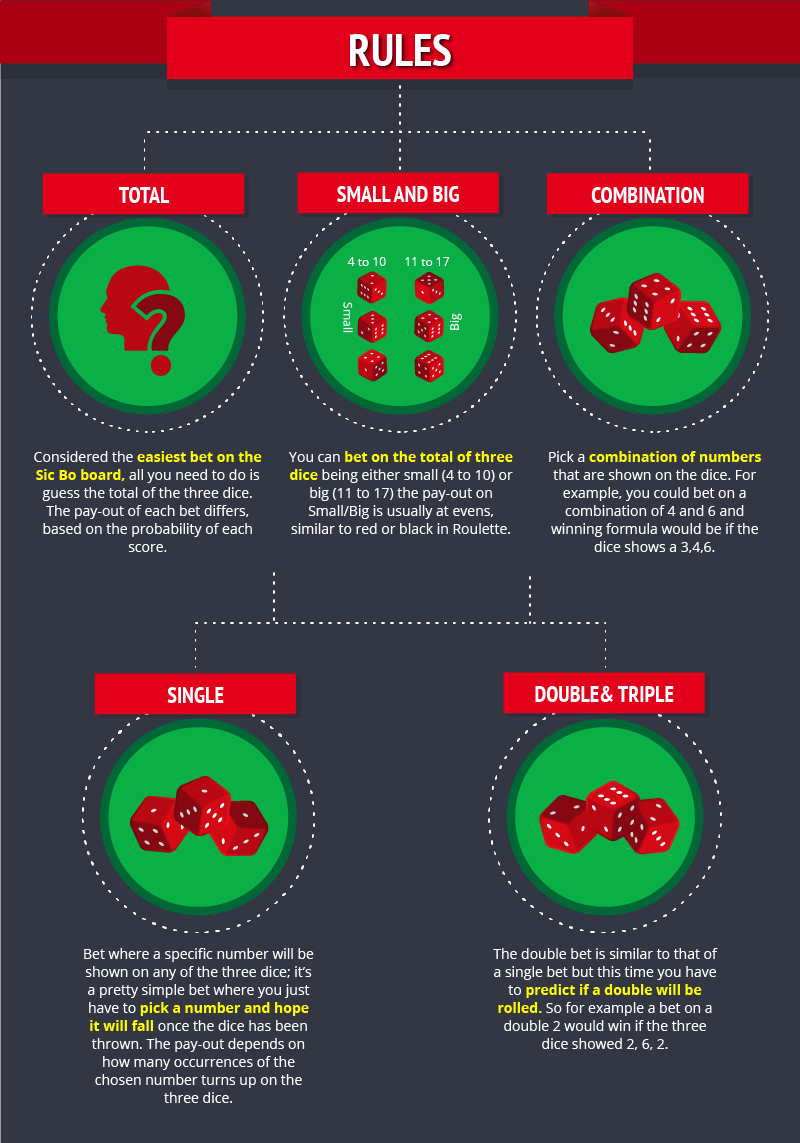 When  you see the Sic Bo table for the time, you’ll likely notice a large grid lined out on the felt with a number of squares displaying word, numbers and illustrations of dice filled out on the grid. For beginners, breaking the grid down into sections is a great way to get started and will make it less overwhelming. To bet, all you need to do is place your predictions on the betting squares that take your fancy. To do this, you need to be aware of what types of bets are available:

Considered the easiest bet on the Sic Bo board, all you need to do is guess the total of the three dices. The pay-out of each bet differs, based on the probability of each score occurring which are clearly displayed on the betting squares.

You can bet on the total of three dice being either small (4 to 10) or big (11 to 17) the pay-out on Small/Big is usually at evens, similar to red or black in Roulette. Consequently, if a triple were to appear; either a 3 or 18, will mean you lose the bet. This is why you can’t pick these numbers when betting in this form.

This is a bet where a specific number will be shown on any of the three dice; it’s a pretty simple bet where you just have to pick a number and hope it will fall once the dice has been thrown. The pay-out depends on how many occurrences of the chosen number turns up on the three dice. There are a variation of odds that depend on the outcome of this game- if one number turns up you get paid 1 to 1, if two guessed numbers turn up you get paid 2 to 1 and if three turn up, you get 12 to 1.

The double bet is similar to that of a single bet but this time you have to predict if a double will be rolled. So for example a bet on a double 2 would win if the three dice showed 2, 6, 2. The same goes for a triple but you have to guess if all three dice will show a specific number. The pay out on a triple is 30 to 1 and is a fantastic return if it comes up. 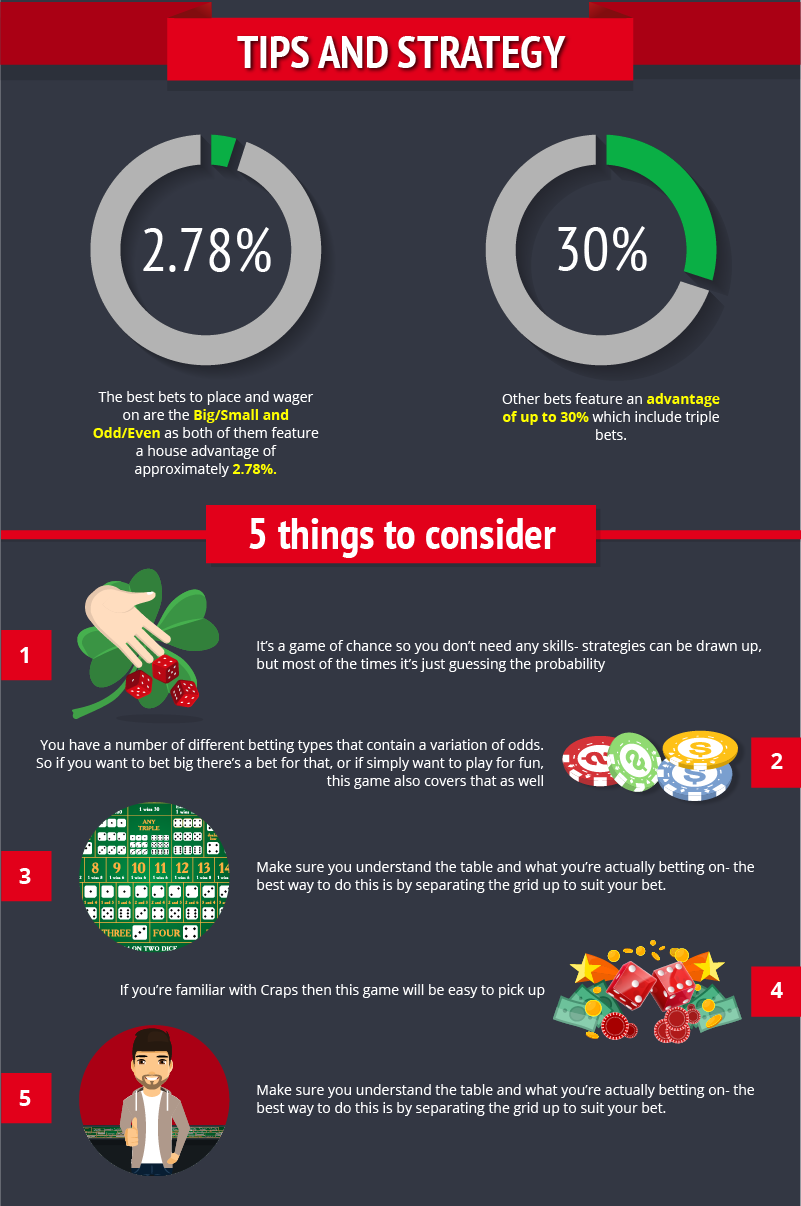 As the game of Sic Bo is based on pure luck, having any specific skill or strategy is irrelevant, yet there are several tips that can gift you more opportunities in winning.  The best bets to place and wager on are the Big/Small and Odd/Even as both of them feature a house advantage of approximately 2.78%. Other bets feature an advantage of up to 30% which include triple bets. If your goal is to have a good time and hope to hit some really big pay outs; combinations and triples are the best bets for you.

So as you can tell, Sic Bo is a rather simple game that requires no skill, all you need to do is make sure your aware of the mechanics that consist within the game and know what bets you want to place, so before you go and give this historic game a try, here are 5 things to consider: