Bingo has been around for an incredibly long time and even now it has proven to be very popular to the masses around the world. That number has only grown with the addition of online bingo. Now even more people are able to enjoy the game in the comfort of their own home. One of the reasons that bingo is universally popular is that it’s such a simple game to play. It is also very easy to understand, and the simple process involved in playing the game makes it easy for anyone to learn, and this means that it is very accessible. 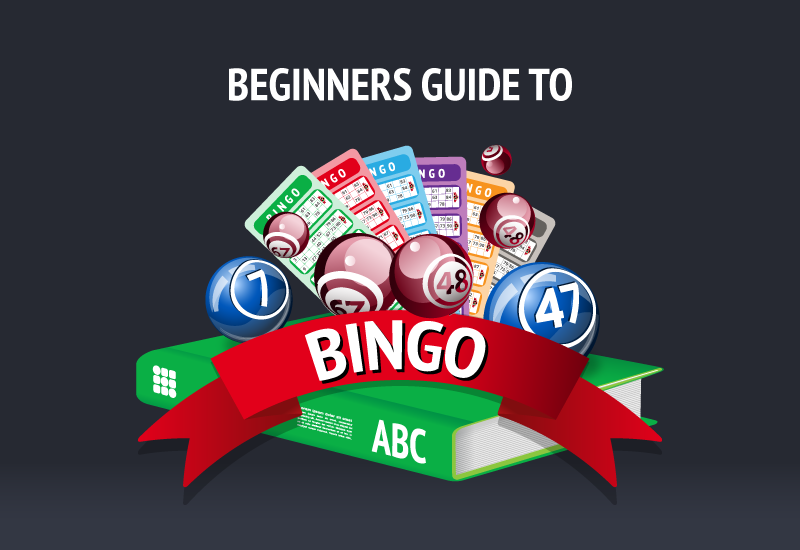 The game is not only easy to follow but it also requires little skill to play the game. However, players need to be able to keep their cool and stay focused throughout the game. Once you have a system the experience should become much more enjoyable as you will be able to keep up with the fast calls and number marking. If you’re ready to up your knowledge on bingo and learn how to play like a pro, then you have come to the right place, as this guide has everything new players need to know about bingo.

The basics of Bingo

The single most important aspect of bingo is the card, or the bingo book as it is commonly known. The bingo book is what you play your game on, and on every page there are several tickets. Each ticket contains 25 spaces which are arranged in nine columns by three rows. Each row contains five numbers, as well as blank spaces. The first column contains numbers from one to nine, the second column has numbers from ten to twenty, the third has twenty to thirty, and this continues until the last column which has numbers from eighty one to ninety. There are normally six tickets per page which acts as one full game of bingo, allowing every number from one to ninety to appear across all six tickets, if players buy a full strip of tickets it means that all numbers are guaranteed to be marked off, but doesn’t mean that they will win.

Once all players have their bingo book and tickets, the game is kicked off by the caller, whose job is to call out the numbers and validate winning tickets. Normally the prizes are announced before each game starts. The caller usually says ‘eyes down’ to indicate that the game is about to begin. They then begin to call numbers which are always selected at random, whether you are playing in a hall or online. There are different formats on how the numbers are called, usually with phrases like ‘both the sixes, sixty six’, or ‘four and five, forty five’. However, each of these numbers come their very own special bingo lingo, like ‘jump and jive, thirty five’.
It is important for players to stay focused when the calls begin as players will need to check to see if that number appears on their ticket. If it does, and you’re playing in a bingo hall it will need to be marked off with a ‘dabber’. Dabbers are only generally used in live bingo clubs and halls. Any other places where bingo is played it is commonly known to mark the number off by putting a cross through it.
With online bingo games the same applies; marking off numbers as they are called, although with some online games, players are able to use an auto-dab feature to ensure they never miss a call. When playing online bingo games, players will be given the choice of how many books and tickets they want to play. Each game also has a caller, and a display board that reveals the numbers. The game pattern will also be displayed and the number will become automatically marked.

When all the numbers required to win the prize have been marked off, the player has to shout in order to attract the caller’s attention. There are no formal rules as to what should be shouted but once you have won a game of bingo most players will shout ‘yes’ or ‘bingo’. However some players may decide they want to shout ‘line’ or ‘house’ depending on their particular win. Others will choose to shout ‘house’ for any type of win, if in a hall or club an official will then come and check the players claim. However when it comes to online bingo games you are able to see automatically if you have won and what prize you will receive. In bingo games there isn’t just one winner, as there are four different types of winning combinations, so you inevitably have a greater chance of winning than you may first expect.

The first is four corners, where a player marks off the top and bottom numbers on the left and right hand side; this is considered a win in only a few different types of bingo games. Then there is a line, which should be a horizontal line of five numbers marked off on the ticket. Two lines, covers any two lines on the same ticket. Then the big winner is a full house, which means all fifteen numbers will be marked off on the ticket.

Yet as you would imagine, different countries have different rules, and in New Zealand they often have an extra win, where three lines may be claimed – top, middle and bottom. However here in the UK, it is most common for winning combinations to consist of four corners or a line game, which is then followed by a two line game and then a full house game.
Just be aware that you need to be quick about announcing your win. If a player does not stop the game in time and the caller has already announced the next number, the player’s winning claim can then become invalidated. 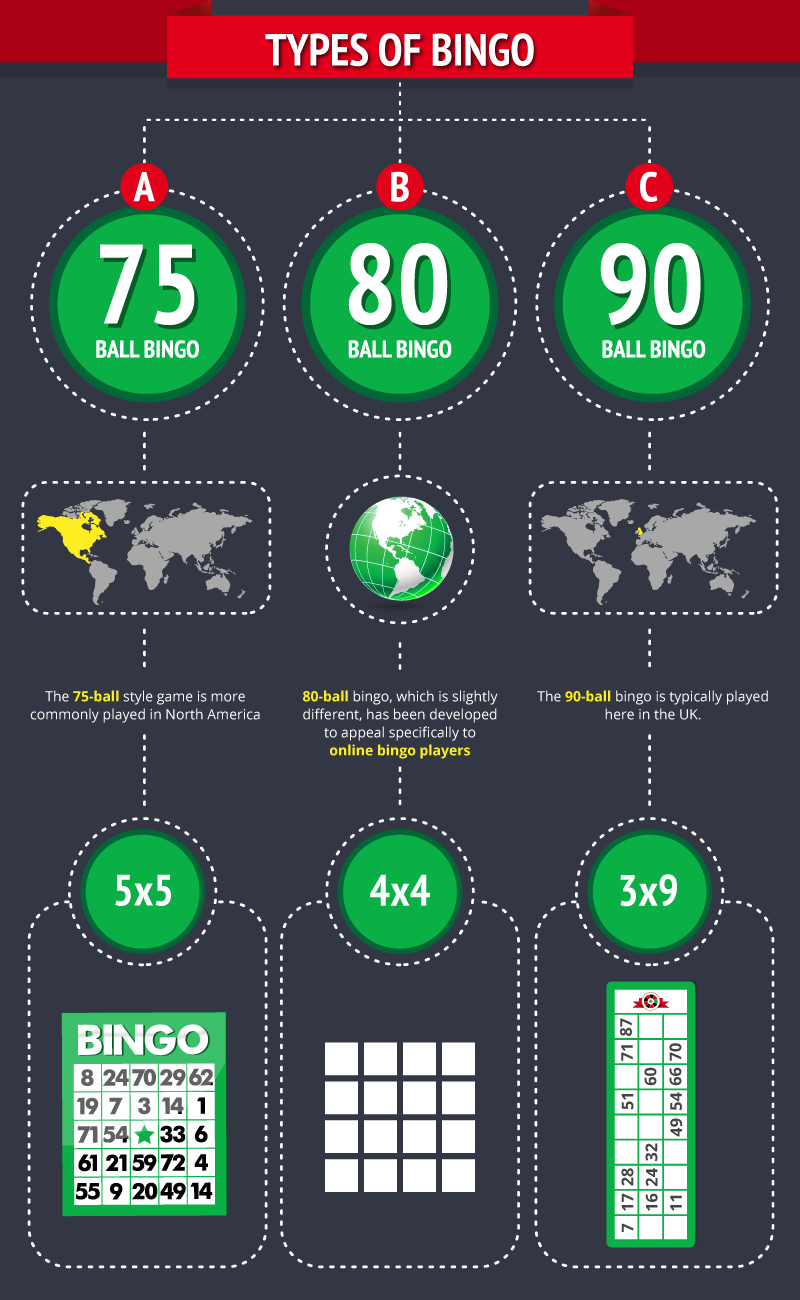 The 75-ball style game is more commonly played in North America, players purchase bingo books with numbers in a five by five grid. The grids tend to have a header on each column spelling out each letter of bingo. Numbers are again randomly drawn out of a total of 75 balls. With 75-ball bingo there are a great deal more winning combinations, depending on the venue or the website punters are choosing to play on. The first combination is the classic one line which can be vertical, horizontal or diagonal; the combinations then go up to four lines with vertical, horizontal or diagonal lines. Then there is the full house win, and four corners.
90-ball bingo is typically played here in the UK, with the same rules applying, although the winning combinations are of course one line, two lines, four corners and a full house. 80-ball bingo, which is slightly different, has been developed to appeal specifically to online bingo players. The winning combinations in 80-ball bingo include any line, four corners, four middle squares, full house and four columns.

5 more things to keep in mind

Bingo is a very popular game and is a really easy game to follow once you’ve started playing, and with all games practice really does make perfect. If you want to learn how to play bingo the best way to do so is to head down to your local bingo hall and start practicing. Another alternative is of course signing up to an online casino, and playing bingo from your phone or laptop. For the best online bingo games, with a great selection of promotions you can find them right here at Best Deal Casinos. No matter how you plan on playing your game of bingo, here are 5 things to remember. 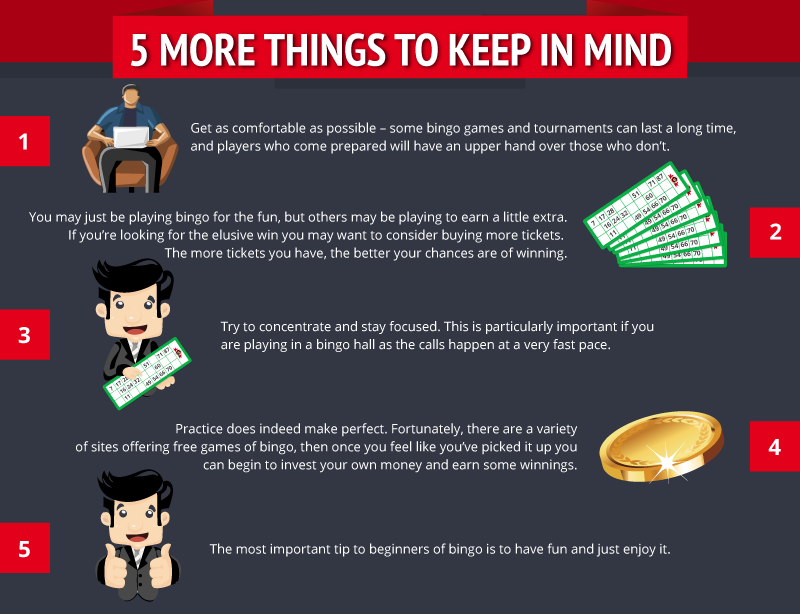 • Get as comfortable as possible – some bingo games and tournaments can last a long time, and players who come prepared will have an upper hand over those who don’t.
• You may just be playing bingo for the fun, but others may be playing to earn a little extra. If you’re looking for the elusive win you may want to consider buying more tickets. The more tickets you have, the better your chances are of winning.
• Try to concentrate and stay focused. This is particularly important if you are playing in a bingo hall as the calls happen at a very fast pace.
• Practice does indeed make perfect. Fortunately, there are a variety of sites offering free games of bingo, then once you feel like you’ve picked it up you can begin to invest your own money and earn some winnings.
• The most important tip to beginners of bingo is to have fun and just enjoy it.

Please check out our other guides, including guides on Craps, Keno, Blackjack & Poker.